The Boy I Love, by Nina de Gramont 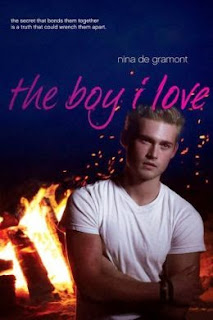 This year, Wren and her best friend Allie are starting at a new high school.  It's bigger than their old school and full of lots of opportunities.  But Allie is quickly disappointed when she fails to make the cheerleading squad and the cute upperclassman Tim isn't interested in her.  Meanwhile, Wren (who was never sure she'd be comfortable at the new school) not only lands a part in the Fall musical, but has gained Tim's attentions.  Allie is jealous and Wren wishes she could tell her friend not to worry about it.  However, she's been sworn to secrecy:  the truth is that Tim is gay (a fact that Wren wishes wasn't true as she'd like to date him, but which she accepts with much more grace than her peers would).

But helping Tim keep his secret is only one of Wren's trials.  Her family is facing bankruptcy and it is likely that they will be selling their home.  Not a moment too soon for Wren's older sister and her Dad, who both associate their old plantation with the shameful past of slave-owning ancestors.  But for Wren's Mom and her, the looming changes are scary.

It's a busy little story and one wonders if it needed to have so much going on.  The themes of homophobia and racism have a moderate amount of tie-in, but the financial woes really seemed like an entirely separate story.  Still, I liked the attempt to tell a story about a young woman in love with the wrong man -- it just isn't much of the story.  And unfortunately that's the thread that the publicists have taken too.  The novel is anything but the "romance" it is billed as.  Rather, it's a story about how various people deal with prejudice.
Posted by Paul at 8:23 PM