The Porcupine of Truth, by Bill Konigsberg 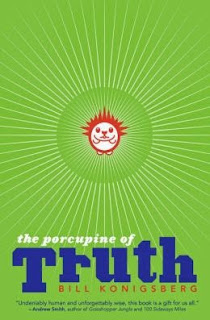 Carson hasn't seen his father since he and Mom left when Carson was four.  So ending up back in Billings, Montana to help his mother take care of Dad (even if he is dying -- from complications of years of alcohol abuse) isn't exactly Carson's idea of a great way to spend the summer.  But on a visit to the woefully underpopulated Billings Zoo, he meets Aisha -- a young woman who has just been thrown out of her home for being a lesbian by her homophobic parents.

A friendship between Carson and Aisha develops and takes on new meaning when they uncover evidence that his grandfather (also estranged and long absent from the rest of the family) may in fact still be alive.  Following a few leads, Carson and Aisha set out on a road trip that will take them all the way to California, along the way exploring spirituality (through the eponymous Porcupine of Truth) and learning about the true meaning of family.

It's a decent road trip story, with some colorful characters and a fair share of tumbles and turns.  However, it really takes off towards the end when Carson learns about his grandfather.  The two weakest parts of the book for me were the spirituality discussions (which I found either trite or overly simplistic) and the ending (which suffers from overly convenient resolution in the form of a wealthy benefactor).  But those blemishes are countered by Konigsberg's excellent exploration of the family loyalty and acceptance, and by the characters.  I liked Carson's wit, his ability to bullshit ad hoc, and his predilection for bad puns.  Aisha is a sympathetic young woman struggling for acceptance (not always successfully) from Carson and others around her.  Both of them were winning personalities and made the read enjoyable.


[Disclaimer:  I received a free copy of the book from the publisher in exchange for an unbiased review.  After I am finished with the book, I will donate it to my local public library.]
Posted by Paul at 2:30 PM