The Story of Tracy Beaker, by Jacqueline Wilson 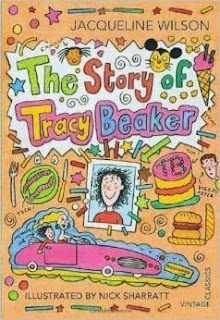 (And now for a palate cleanser!)

Tracy Beaker lives in a foster home because her mother is a famous beautiful person who is off in Paris or in Rome, or probably starring in a movie (cause she's so beautiful and all!) in Hollywood.  And while Tracy wishes she would come round for a visit, she knows that that probably isn't going to happen.  And she also knows that she may tell a fib or two, but it's completely justified, considering how everyone abuses her and tells stories about her.  Now, if she could just convince a nice writer lady named Cam to foster her and get her out of this Home (or at least take her to McDonalds and get her some presents) that would make up for everything!

And so it goes.  A breezy middle reader about a ten year old girl in a British foster home.  Wilson tells us her story precisely by avoiding it altogether, having Tracy talk about everything except the truth.  Rather than admit how much she misses her mother, she's allegedly perfectly content to be a rabble rouser and carry on.  The misbehavior and acting out that fills the pages are on their surface annoying and grating, but ultimately sad as we realize the pain and rejection which Tracy herself cannot quite accept.  As such, the book has a subtle nature to it that I don't imagine quite sinks in to younger reader's heads.  I wonder what they do think of Tracy?
Posted by Paul at 3:33 PM