Counting to D, by Kate Scott 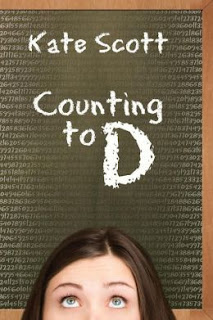 Sam is crazy smart when it comes to math and she doesn’t do too badly in her other subjects.  In fact, she’s taking solely AP classes in her sophomore year.  But at the same time, she's hiding a big secret:  she’s dyslexic and completely illiterate.  She gets by through listening to her textbooks on audio recordings (and, the math is easy because it’s all numbers).  It's worked for her for many years.

But when she and her mother relocate to Oregon midway through the year, Sam has to start at a new school.  Her precocious abilities bring her to the attention of the smart clique at school and, in particular, a nerdy (but very hot) senior named Nate.  But what would her new friends think if they found out about her concealed disability?

The book does a great job of explaining dyslexia to reader and I liked the kids.  Scott does a nice job building up her characters and avoids a lot of stereotypes that fill YA books:  In this world, kids don’t always fight with parents, pretty A-listers can be friendly with geeks, and kids don’t always get sick when they are drinking.

But the story itself left me cold.  There was simply no dramatic tension in the story.  There’s all sorts of set-up, but Scott seems unwilling or unable to let things blow up.  There isn’t even a hint of tension between Sam and Nate.  The feared revelation of Sam's dyslexia is a non-event.  Basically, without any drama, there isn’t much of a story.  Scott also has a mission here (teaching us about her own struggle with dyslexia) and the book frequently veers into preachiness, which is always a turn-off for me.
Posted by Paul at 10:38 PM