Falling Into Place, by Amy Zhang 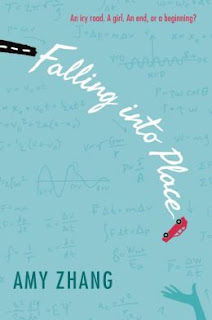 Liz struggles to understand her physics class, but she thinks she may understand the Three Laws of Physics, at least as far as they have been manifested in her own life -- a series of actions and reactions.  That life is just about to end at the beginning of the book, she hopes, as she drives her car into a ravine on purpose.  In her reflection, it’s a miserable life full of cruelties she has committed against her peers and plenty of suffering that has been self-inflicted.  That may seem harsh, but through a series of flashbacks and flashforwards, we slowly come to understand why she wants to die.

It’s a poetic and well-written story, but gruesome and relentless in its depiction of Liz and her friends – lives full of substance abuse, petty rivalries, and thoughtless cruelties.  It isn’t so much overblown (in fact, it all seemed quite realistic) but the truth is that Liz really isn’t a nice person.  And while her peers seem willing to forgive her, the reader is not necessarily going to be ready to do so.  At each point we understand her and start to absolve her, something even more horrible shows up to shock us again.  Overall, the portrait that Zhang provides of these teens is not flattering.  So, while well-written and plotted, it is a depressing and discouraging read.
Posted by Paul at 2:51 PM