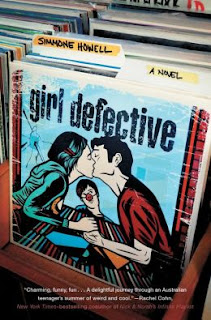 Skylark, her little brother Gully, and their dad live by a second-hand record shop run by their father in the beach town of St. Kilda.  Mom left them to become a famous performance artist in Japan and Skylark passes time posting confrontational messages on her website, while sitting in the store and ogling a hot new co-worker.  Gully obsessively wears a pig snout on his face and communicates through detective "reports" that he regularly issues.  It's an interest he gets to cultivate further when an unknown vandal lobs a brick through their store window.  There are other mysteries, including a drowned girl, a new friend for Skylark at school, the search for the ultimate single, and the role of a sexy singer wearing a fox mask.

Aussie YA always seems a bit weird and generally has never appealed to me.  This particular example is weirder than most and awkward in the way it tries so hard and so self-consciously to be hip.  The story is a mess, following no discernible trajectory.  Without a story I cared about, I found keeping up with the cast of characters to be nearly impossible.  I suspect that simply lost the track altogether because I couldn't figure out what was going on.  All of which may raise to mind the old chestnut that you shouldn't review a book that I don't understand.  But, really, why should reading a book be such a chore?
Posted by Paul at 2:25 PM