How To Speak Dolphin, by Ginny Rorby 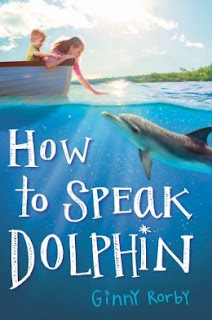 Taking care of her severely autistic half-brother Adam has stretched Lily and her stepfather to their limits.  But getting help has been difficult because no one wants to deal with him.  Caregivers say he should be in a program to learn coping mechanisms, but Lily's stepfather (who is in denial about the scope of Adam's difficulties) resists the idea.  That is, until they discover the concept of Dolphin Assisted Therapy (DAT).  Adam has always loved dolphins and swimming with them makes him happy and seems to help him adapt.  It gives the family hope, but finding a program nearby is challenging.

When a young dolphin is rescued and is brought to a nearby commercial aquarium to recover, it is a rare opportunity.  Lily's stepdad is brought in the consult on the dolphin's care and, in exchange, the aquarium allows them to hold DAT sessions for Adam.  However, as Lily learns the aquarium's ulterior profit motive (and her father's willingness to abet it), she realizes that what might be helping her brother is harming the animal.  They need to end the therapy and let the dolphin go.  But how can she do this if it will hurt her brother?

The combination of a story about autism and about dolphins is busy.  Throw in a blind best friend, dad's complicated emotional response to his son's disability, and a dead mother and it gets more crowded than a Sea World tank!  But it all works.  Middle readers may find the extended depictions of Adam's behavior or the dolphin's activities to be a bit dull at points, but Rorby has done her homework and wants a chance to convey it.  The fact that she makes it all readable and interesting while also education is remarkable.  The end result is a satisfying story about family loyalty, empathy for other (animal and human), and learning to accommodate differences. And it's all wrapped up with a beautiful ending that threatens to make you bring out the Kleenexes but ultimately avoids sentimentality.


[Disclaimer:  I received a solicited copy of the book from the publisher in exchange for an unbiased review.  I'll be donating the book to my local public library.]
Posted by Paul at 3:13 PM