I'll Give You the Sun, by Jandy Nelson 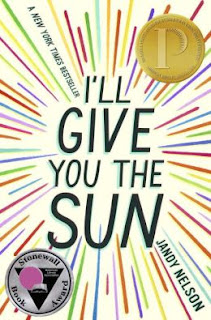 Jude and Noah were as close as twins could be even through all of their differences.  At fourteen, Jude was the popular normal one, while her brother was always a bit eccentric and an outcast (partly because he was secretly harboring homosexual urges).  Both of them were artistic and they were both applying to art school.  But of the two of them, Noah had the best chance of being accepted.

Two years later, they no longer even talk to each other.  Noah has given up art, become a jock, and has a devoted girlfriend.  Jude is the only one in art school but is perennially unhappy with her work.  Driven to produce a life-defining work (and to do so in stone), she is directed to a reclusive and bitter sculptor who has his own set of baggage.  Surprisingly, he and his assistant also hold the key to sorting out what destroyed Jude and Noah closeness.

Like all good tragedies, the interesting part is in unraveling the confluence of events that explains what happened.  Nelson weaves a tight story that unwinds slowly with just enough false leads to keep things interesting.  The characters are well-developed and multi-faceted.  It’s well-written and a good read.

I wouldn’t mind jumping on the bandwagon of praise for this book (winner of this year’s Printz award, NYT best seller, etc.) except for one small matter:  it’s not a young adult novel.  Rather, like The Book Thief and Criss Cross (to cite a few other egregious examples), this is an adult book that is being marketed to YA readers simply because the characters are adolescents.  I get that the YA market is lucrative, but there’s a lot more to writing a book for young adults.  For one thing, write a book that addresses the process of growing up or deal with issues that matter to them.  With all the talk about aesthetics and regret (without the usual angst), this has adult sensibility all over it.   Not to say that advanced readers couldn’t handle this book or wouldn’t enjoy it, but that doesn’t make it YA. and giving the preeminent award for teen fiction to a book simply because librarians like it is insulting to the many talented writers that really have an ear for young readers.
Posted by Paul at 7:49 PM