None of the Above, by I. W. Gregorio 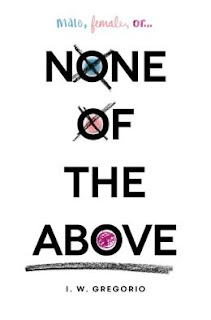 After a traumatic sexual experience with her boyfriend, eighteen year-old Kristin visits an OB-GYN to find out what is wrong with her.  She learns that she has a genetic abnormality called androgen insensitivity syndrome (AIS) which has left her with an ambiguous sexual identity.  Outwardly, she appears to be a female but internally she has no uterus.  She has two hernia which are actually underdeveloped gonads.  Kristin is, as her doctor explains, "intersex."

The idea that Kristin is not a "true" girl is hard for her to accept.  She's a track star on the girl's team.  She has a boyfriend.  She's even the homecoming queen!  And she's been a girl all of her life.  Kristin needs time to process it.  But when she mistakenly entrusts her secret and confides her situation to her best friends, she is betrayed and the matter is made public.  At school, many of her peers are shocked and turn against her in disgust.  Her boyfriend outright rejects her.  And, as Kristin realizes that this is only the beginning, she despairs that she will never find a place in a binary world where she doesn't fit.

I knew very little about AIS (although I imagine we covered it briefly in a genetics course).  Prior to reading this book, I would have even described Kristin as a "hermaphrodite" without realizing that the term was considered offensive.  I knew nothing about the complications of the condition or the treatments that are pursued.  Thus, the novel taught me a lot.  At the same time, the book sometimes seemed to forget that it was a work of fiction.  Teens would break character and start rolling out detailed explanations of the condition, doctors would conveniently start supplying copious medical facts, other characters would spout wisdom from web pages.  I get that Gregorio has a mission here (and I even respect that mission!) but there's a fine line between telling a story and lecturing the reader.  Getting that balance is very tricky.  Here, it works sometimes and sometimes it doesn't.

At a time when transexuality has gotten so much attention, it's fascinating to explore the concept of intersexuality.  Previously, I would have considered them to be one and the same, but this book has taught me that they are different.  On that basis alone, I would recommend it.  The fact that the novel is quite readable and the characters are sympathetic (and mostly authentic) makes it a strong recommendation.
Posted by Paul at 8:00 AM