The Opposite of Love, by Sarah Lynn Scheerger 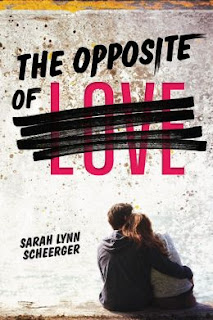 "The opposite of love is not giving a damn," says Rose, and she should know.  Abandoned by her mother and adopted without any say by super strict (and largely clueless) foster parents, sixteen-year-old Rose feels trapped in her life.  They won't listen to her, so she has become mute.  And as she has grown non-communicative, they have shut virtually imprisoned her at home and cut her off from her friends (which makes her angrier and less communicative in a vicious cycle).  When she runs away leaving a goodbye note with her friends Chase and Becca on Christmas Eve, her friends completely freak out and race to track her down.  This precipitates a series of flashbacks in which we learn how Chase has had his own demons to deal with.  And how Chase and Rose have mostly been the blind leading the blind.

For most of the duration of the story, this seemed to be a novel about learning to rise above the hand life dealt and to break free of parental bonds, to learn to accept responsibility for yourself, and to make your life your own.  And while it does actually end up on that track, there's a sudden plot twist in the last forty pages which completely changes the way the story treads.  It drastically increases the stakes and adds all sort of complexities, and it is never foreshadowed.  As the book's message stays unchanged, I'll assert that the twist was unnecessary and distracting.  I won't spoil the ending for others, but it seemed like a sledgehammer delivery for a story that was getting there just fine on its own.  It also seemed like an easy out for a tale that called for subtlety, and replaced it with high stakes drama.
Posted by Paul at 1:20 PM