All We Have Is Now, by Lisa Schroeder 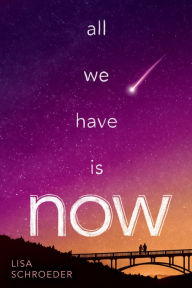 A giant asteroid is hurtling towards Earth and expected to impact somewhere in Idaho in slightly more than twenty-four hours.  While no one know for certain how big the damage will be, the smart money is on the idea that North America will suffer the worst.  Anyone with the means has evacuated weeks ago to far away places.  The only people left are the poor, the homeless, or those who simply don't have the energy or will to run.

Emerson and Vince are two street kids in Portland, trying to figure out how to pass their last hours.  A chance encounter with a man who has given up entirely nets them a fat wallet, a BMW, and a final mission: to try to make as many people's dreams come true as possible before it all ends.  The story basically follows them as they attempt to find meaning (for themselves and for others) in the now, in a world that is rapidly coming to a close.

An interesting premise, but handled with a lethargic pacing and interrupted with interminable digressions.  Truth be told, I've started all and finished few of Schroeder's books (I have a general policy -- believe it or not -- to not actually finish and review books I hate).  Her style is very ethereal, with a strong focus on dialogue which largely is unrelated to the plot and on plots which are largely irrelevant to the book.  The fact that I've finished this one means it will earn at least a star...barely.  The story really isn't about the end of the world at all (which is fine!), but rather about trying to get at the deep meaningfulness of living in the moment (which, by definition, is not a very deep idea).  The dialog ranges from dull reminders that we only have so much time to whining about how it sucks that the world is ending.  It's the sort of book where the temptation to flip forward to the end of the book is strong simply because you want there to be a point in all this.  Don't do it!  Let's just say that the end of the world isn't really all it's cracked up to be!


[Disclosure:  I received an advanced release of this book from the publisher in exchange for an unbiased review.  After completing my review I will be donating the book to my local public library. The book is scheduled for release on July 28th.]
Posted by Paul at 1:38 PM