Everything Leads to You, by Nina LaCour 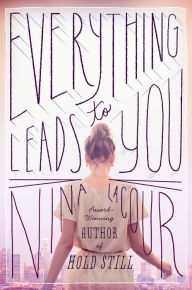 Emi and her friend Charlotte have been entrusted with her brother's apartment for their first summer after graduation.  In exchange, she has promised him to do something "epic" with it.  But what?  Emi is just a struggling intern in a film art department, a mere beginner in the field and hopelessly in the shadow of her boss (on whom she has a crush).  But two things change her life:  her would-be love gets her a job as the art designer on an exciting independent film, and Emi and Charlotte stumble across a letter written by golden movie idol Clyde Jones.  The letter is addressed to an unknown lover and Emi and Charlotte become obsessed with tracking her down.  In doing so, they unloose a series of unforeseen events which truly turn the summer into something incredible.

It's a busy story with at minimum three major storylines (Emi's film, a romance between her and another girl (as well as her unrequited crush), and the whole search to understand Clyde).  None of these plot lines gel very well (with the possible exception of the romance which gets a very late resolution).  Jumping around with so many stories and characters leaves the story itself unsettled.  I liked most of it, but I found it distracting to have so much going on.
Posted by Paul at 4:43 PM