Princess of Thorns, by Stacey Jay 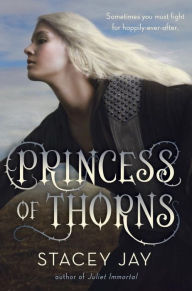 Two noble children at the center of curses:  Aurora (who lies at the center of a prophecy that the spilling of her blood will plunge the world into an age of darkness) and Niklaas (the younger of twelve brothers, all cursed to be turned into swans on their eighteenth birthdays).  Allied together by their own goals but not quite trusting each other enough to confess their agendas to each other, the duo make compelling partners.  In fairly standard genre form, they must face off against an array of ogres, wolves, witches, and other monsters, but alongside their heroic quest is a subtler probing of the heart.

The story is very much standard by-the-numbers fantasy, with the usual land mass broken up into several kingdoms with lawless borders and a variety of treacherous terrain (and yes, there's a map at the front!).  There's plenty of politics and treachery to spread around, and lots of great battle and action scenes.  The characters are compelling, with an especially fiesty heroine and some excellent girl power scenes, while still allowing her some pretty dresses along the way.  The myths and prophecies are a bit hard to plow through (especially since they are front loaded in the preface with little or no context), but they serve the purpose of setting the desperate mood of the rest of the story.  And, despite all the familiar stuff, the ending is not nearly as predictable as one might imagine.

But what really makes this book stand out is the fantastic romance between Aurora and Niklaas.  You could strip out all the monsters, action scenes, and the dozens of peripheral characters in this book and you would still have a compelling story of two young people struggling with their feelings for each other.  You'll have to wait all the way to page 299 for the first kiss, but it's so worthwhile that the description runs two full pages and becomes a major plot point.  Their story is hot, sweet, and incredibly sexy, and I'm giving this book a strong recommendation on that alone.
Posted by Paul at 3:59 PM