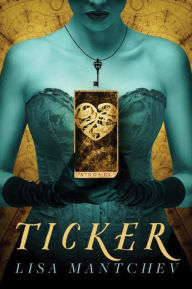 Penny Farthing is the girl with the clockwork heart. "Augmented" through an artificial organ, she is the first girl child in her family to survive a genetic defect.  But the surgeon responsible has fallen out of favor as public opinion has turned against augmentation.  Worse still, evidence has piled up that he kidnapped and used involuntary subjects for the development.  Now facing the gallows, all hell breaks loose when he escapes and plunges the Empire into chaos in his quest to augment mankind.  It takes Penny and a collection of friends, including the dashing young general Marcus Kingsley, to come to the rescue and stop the madman.

A delirious and breath-taking steampunk adventure set in the usual mash-up of Victoriana and technology that defines the genre.  It's a genre which has always mystified me.  I personally love Victorian and Edwardian style and I will salivate over the look of polished brass and oak as well as anyone, but once you get beyond the beauty of the whole thing, what is left?  Nothing, really, except for endless silly titles and faux manners.  And this is where the story falls down for me.  It's all very stylish and pretty, but once we've established these facts, there is no where to go with this information except to race off to the next opportunity to dress up and show off another wacky techno-gadget.  This makes for a fast paced and breathtaking story but keeping up with it is exhausting and ultimately not rewarding.  And so, after a while, I simply let it take me wherever it wanted to go.  There's plenty of witty repartee, but not a lot of emotional investment here and certainly no soul in this mechanical heart.  But if what you crave is a fashionable and shiny adventure, this will do the trick.
Posted by Paul at 2:51 PM