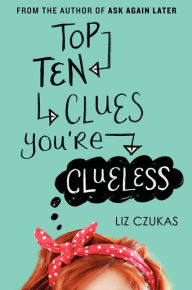 In a story that can best be described as a cross between Cashback and The Breakfast Club, six young adults get detained on Christmas Eve in the break room of the grocery store at which they work.  The money from a charity drive has gone missing and the manager suspects it was one of them who took it.  Waylaid for several hours, the kids share stories and get to know each other, having a variety of adventures including a race through the store and even a little romance.  Our narrator, who has an obsession with making up lists and poor control over her diabetes, makes things more interesting.

It's a cute idea.  Occurring in a fairly tight space and being dialogue-heavy, the story has the feeling of a play.  As such, it relies hard on the strength of the characters who are a predictable mix of types (good girl, dyke, home-schooled geek, etc.).  Thankfully, they are deeper than that and the fun in the book is getting to see them break through the stereotypes.

It is a brisk fast read, yet still ran a bit long for my taste, simply because it doesn't have much to say.  And I never quite figured out the connection between the title and the story.  It did, however, put me in the mood to watch those two aforementioned films again (http://www.cashbackfilm.com/   and I assume you know how to find the other one!).
Posted by Paul at 3:41 PM