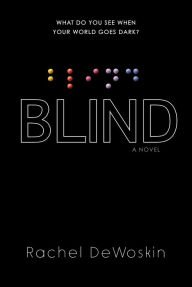 After a freak accident causes Emma to lose sight in both of her eyes, she has to go through the rehabilitation process of learning to function as a blind person.  Told partially through flashbacks, Emma describes her second year as a blind person as she returns to her old high school to be mainstreamed after spending a year convalescing and attending a school for the blind.  The year of her return is complicated by the suicide of one of her classmates.  Trying to make sense of that tragedy becomes part of Emma coming to terms with her own misfortune.

A long and ultimately fascinating look at the process of a formerly-sighted person learning to survive without vision.  DeWoskin obviously did an amazing amount of research and she confidently describes the various challenges of recovery and the process of developing strategies to compensate.  She also works in a fair amount of sympathy for how normal adolescent anxieties interact with those processes.  I felt like I really understood how a recently-blinded teen would act and Emma had a very authentic feeling to her.

What I liked less was the clutter of this story.  My attempt above to explain the role of the suicide storyline in the novel is far more coherent than it is ever made in the book.  Instead, this secondary story never really gelled with the rest and was full of many largely unanswered questions and plot points.  I'm sure it initially seemed like a fantastic idea, but in the end the death of a peer simply hangs limply alongside the far more fascinating rebirth of Emma.  Some brutal excising of that part of the story would have trimmed out a hundred or so pages but given this novel a better focus.
Posted by Paul at 12:03 PM