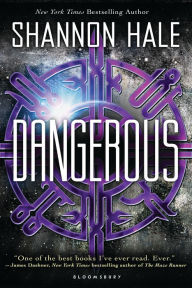 Maisie wins a sweepstakes opportunity to attend a space camp.  This is a dream come true for a one-armed girl with desire to reach for the stars.  And when her team at the camp wins another contest that allows them to go out into the stratosphere, she really has reached her greatest ambition.  That's the point when alien technology takes over her team's bodies and things start getting very serious.  Soon, there's violence and mayhem, zombifying viruses, and a secret war between a space pioneer and a scheming megalomaniac.  Meanwhile, Maisie is struggling with what to do about her boyfriend who keeps alternating between trying to kiss her and trying to slaughter her family.

I love Shannon Hale's fantasy books -- the Bayern series and the Princess Academy books are great -- but she really doesn't know what to do with science fiction.  She's not a science geek and whenever this book tries to get into the hard science it falls into absurdity.  And meanwhile, while trying to provide a plausible scientific background for the story, Hale lets the plot slip away.  Most of the story makes little or no sense.

No where is the story less incomprehensible than in the "love story" between Maisie and Wilder -- a coupling that is at best like the more obnoxious elements of Rory and Logan's relationship in Gilmour Girls (sorry, if you were a fan!).  How can we possibly believe that she is lusting after the guy who tried to kill her family twenty pages ago?  And, if that's really how she feels, how can we feign interest in someone so shallow?  Yes, it's silly (and Hale is trying to go for silly), but it's also an ungodly mess!
Posted by Paul at 8:11 PM