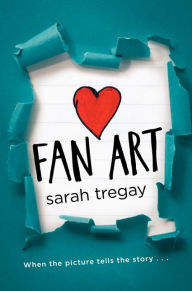 Jamie knows that falling in love with your best friend is never a good idea, but especially when he doesn't know that you're gay (and you don't know if he is).  But when one of Jamie's other friends makes him publish her gay-themed fan art in the school literary magazine (with two characters that look suspiciously like Jamie and his friend), the cat is about to be let out of the bag.  Time is running out for Jamie to come clean and come out to his friend.  Now, Jamie just needs to find the inner strength to do so.

This is a strange novel and I'm not quite sure how to read it.  Tregay avoids the usual stereotypes of gay YA.  Jamie's parents are accepting.  There's a small amount of static from his peers, but for the most part, Jamie's reluctance to fully come out is just a fear of losing his friend's affection.  But the whole thing seems blown out of proportion.  Why does the publication of the fan art have to be such a big deal?  How is Jamie even vaguely forced to publish it?  Why do so if it threatens his ability to keep his orientation under wraps?  And, why, if he is so afraid to come out, does he make so little attempt to hide it?  And, as for the boys, given the constant mixed signals they keep sending each other, we're all pretty certain how this is all going to end up by the 100th page.  So, what exactly was the point of it?

Still, as an example of a more liberal contemporary view of being a gay teen (in a world where prejudice does not in fact play a defining role), this could be read as a rom-com.  In that mindset, the set ups would seem funny and we could just enjoy the fun of two people finding each other.  But then, Tregay throws in a hint of menace that suggests that it isn't that simple and that she wants to make a statement about how hard it is to be a gay teen.  And so I get confused again about what we're doing here.
Posted by Paul at 7:46 PM