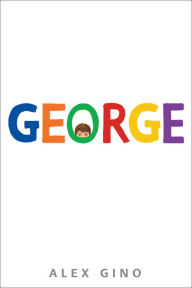 Fourth-grader George has a secret stash of magazines at home.  Her older brother assumes that it's a porn collection, but in reality they are fashion and girls' magazines.  George may be only ten years old, but she considers herself a girl, even if every one else thinks she's biologically a boy.  No one except George knows the secret.  But when George's attempt to try out for the part of Charlotte in the school production of Charlotte's Web is thwarted by her teacher, George's best friend hatches a plan to get George the part anyway and allow George to show her classmates, teachers, and mother that she is really a girl.

If the story sounds familiar, there's an unfortunate reason for that.  According to the author, they spent twelve years gestating this story.  Gino probably should have worked faster as it is hard to not compare this book with Gracefully Grayson and unfortunately, in comparison, George comes up short.  The two books tell basically the same story about a pre-adolescent girl in a boy's body trying out for a female role in the school play.  But Gracefully Grayson explores not just the physical elements of being transgender (surreptitious dress up, etc.) but also goes into great depth about the protagonist's feelings about gender and being respected.  George is a colder, more rational, fourth grader -- noting web articles he's read about psychological studies and hormonal treatments.  The discussions between George and her best friend are largely fact-driven.  The overall approach is clinical and less engaging, and the characters are flat as a result.  If George was the only book on the market, it would be an important pioneering book, but arriving late on the scene it just feels timid.


[Disclaimer:  I received a solicited copy of the book in exchange for an unbiased review.  After finishing my review, I will be donating the book to my local public library.  George will be released on August 25.]
Posted by Paul at 7:42 PM