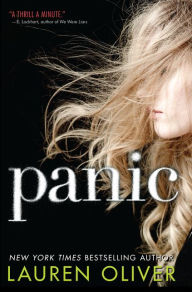 Up in Carp NY, where the adults are zombiefied by meth and the kids see no future, the key pastime of the seniors after graduating is playing a deadly game of chicken called Panic.  Competing for a jackpot worth $50K, these young adults take part in dangerous challenges that test their bravery and skirt death.  As the field narrows down, the game becomes more brutal and the players begin to question their motivations and the sanity of their competitors.  But the game must go on.

I like to think of this as a dystopian novel set in the real world.  If you've ever been to Columbia county in upstate New York, you know the bitter nature of the poverty there, and it's easy to visualize how that landscape that could create a real-world hunger games.  The novelty of that idea captured my interest and kept me plowing through this novel.  But it became a drudge, mostly because the story is so slow moving and the characters so uninteresting.  This isn't a story about heroes or rising above your circumstances, but rather about the soul crushing nature of rural poverty.  And without redemption, we're stuck with characters who yell, swear, and cry, but never really grow up.  And with the action spread out over 400 pages, that's a lot of yelling, swearing, and crying to get through.
Posted by Paul at 8:00 PM