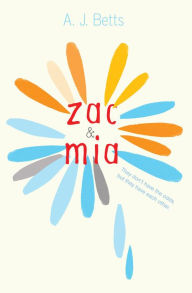 Zac and Mia meet in the cancer ward, where Zac is a worldly veteran of bone marrow transfusions and a calm and reflective expert on the ups and downs of leukemia.  Mia, in comparison, is the lucky one with a relatively simple tumor that should respond nicely to chemo.  But she is angry and resists both friendship and treatment.  In the end, Zac comes out okay and leaves and Mia, while still in the ward, has a good prognosis despite here gloomy and angry outlook.

But things don't end up quite the way the two of them expect.  And in the ensuing months, these two young people go on a trip across the country and across their hearts that has them exploring what it means to be alive and asking what second chances are really worth.

The story bears a superficial resemblance to John Green's The Fault In Our Stars, but eschews much of the humor and irony of that more famous work.  Obviously, both books dwell a lot on death, but Betts isn't trying to answer the Big Questions that Green went after.  And the tone of this book is much lower key.  For that reason, Zac & Mia is a much harder book to digest.  I found it a bit jumpy, with awkward transitions between major plot developments and an annoying obsession with the turning of tables and plot twists.  But it is also harder reading because Betts's book lacks the Hollywood ending that made TFIOS so filmable.

I liked Zac & Mia's humble scrappiness and the story line's interests roam in interesting ways.  Betts, for example, develops the characters of Zac's and Mia's families and friends (in a way that John Green never would have done) and much is made of history and roots.  The relationship of the two young people is central but it exists within a social network that sees healthy development in this novel.  And even the relationship between Zac and Mia has nuances and complex layers of doubt and hope that felt more realistic.
Posted by Paul at 8:17 PM