All the Bright Places, by Jennifer Niven 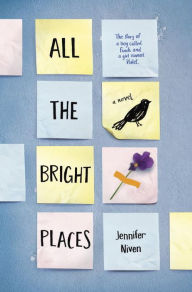 Finch is fascinated with the many ways that people commit suicide.  Violet is living with guilt after the death of her older sister in a crash which Violet herself survived.  They meet on a ledge high above the ground when Finch saves Violet's life after she reconsiders her own attempt to end her life.  They bond.  He's the school freak, bullied by other kids and generally misunderstood.  She's the formerly popular girl who can't seem to get her life together.  But together, Finch is able to get Violet to come out of her shell and she loves him for it.  Unfortunately, her love is not enough to save him as his obsession with suicide becomes more engrossing and destructive.

A rambling and somewhat disjointed look at teen mental illness.  It starts off as a quirky romance that is filled with marvelous facts about the State of Indiana -- the kind of cute novel where oddball kids make appealing partners.  But somewhere towards the end, Niven decides to take the story into darker territory and have Finch completely unravel.  She claims in the Afterword that that was her intent from the beginning, but the story could have gone in many directions and it felt like a detour to me.  And because of that shift, I felt like we lost a lot of Violet's story.  I get that Finch's illness makes for a more dramatic ending, but it is the less interesting story in the end.
Posted by Paul at 8:40 PM