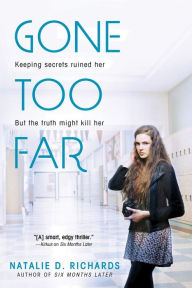 Running late for school one day, Piper comes across a mysterious notebook full of defaced photographs and coded accusations against people in school.  Initially creeped out, Piper eventually becomes obsessed by the book and the various petty crimes it documents.  Then a mystery person starts to send her text messages and asking her to finger people.  That's when things start to turn freaky as the people she fingers end up getting their just desserts.  While that is initially satisfying, Piper begins to get cold feet and the damage turns out to be much more serious than she had imagined.  What started as some leveling of the scales of justice has turned into blackmail, deceit, and far worse.

Borrowing a page quite liberally from Heathers, but without the black comedy, we have a classic story of revenge blown out of control.  Piper is a believable young woman whose passion for justice slips into vengeance, without regard for the consequences.  The fact that her adolescent mind then grossly overestimates her own importance is plausible and tragic.  Thankfully, the adults provide a similarly plausible reality check.  These are not terribly nice people, but they know their faults and the story has a very satisfying conclusion with a good last minute punch to the gut.
Posted by Paul at 8:28 PM