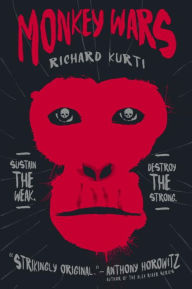 When Papina and her troop of rhesus macaques is driven out of their home in the old cemetery by marauding gray langurs, no one can really know that this is the start of huge insurgency.  But the success stirs the ambitions of a paranoid tyrant named Tyrell, who rallies his langurs into crushing their neighbors and sundering families and friends along the way.  As they run out of external enemies, they they turn on their own, and even start to plot against the humans.  It then falls on Mico, a langur initially enthralled under Tyrell's spell, to challenge the tyrant.

This nuanced allegory about the rise of totalitarianism set amid the feral primates of Kolkata is one of the more imaginative books of the year.  Superficially, it will call to mind the Planet of the Apes, but Kurti's writing is more informed by history.  He makes numerous sharp observations about the psychology of terror and propaganda, and the way that totalitarianism both rises and falls.  It's an extremely gory novel, but one with extraordinarily important observations to make about human behavior.

This is a "boy" book, in the sense that it focuses on action, at the expense of depicting most emotional growth (with the important exception of Mico's emergence as a liberal thinker).  Most of the characters die by the end, so it's best to not get invested (Kurti cruelly spends significant time developing characters who are doomed to be brutally murdered within a chapter or two).  And the story is stubbornly androcentric.  Females play bit (although sometimes crucial) parts in the story which is overwhelmingly about males posturing and jostling for authority and power.  One could blame that on the species depicted, but it is a shame in a story which otherwise uses the primate cover as a thin veil for the human souls expressed.
Posted by Paul at 5:01 PM