The Sound of Letting Go, by Stasia Ward Kehoe 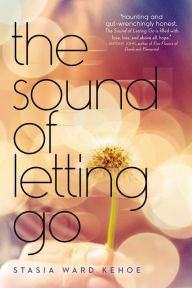 Life in Daisy's house can be challenging.  Her little brother Steven is autistic and he's not so little anymore.  The family is proving less and less able of handling his violent outbursts.  Daisy guiltily wishes that they had a "normal" family so that she could focus on her music and go out more often with her friends, instead of being forced to take care of his brother.  But when her parents decide to institutionalize Steven, she feels even worse.  What kind of horrible people are they to reject their own kin?  She channels her anger into self-destructive behaviors (skipping school, etc.) and an aimless sexual relationship.

I get the conflicted state of Daisy's mind over whether she wants Steven there or gone, but there really is no attempt to come to peace with the decision.  Instead, she waffles back and forth and mopes.  Nor does she ever really confront the other issues in her life (her relationship with boyfriend Dave, her applications to music schools, etc.).  That lack of closure left me feeling like the story just sort of stopped and never properly finished, and while I got a clear sense of how difficult it is to have an autistic member in the family, I got no sense of growth or revelation.
Posted by Paul at 1:12 PM