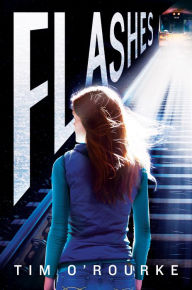 Since her mother died ten years ago, Charley has experienced seizure-like visions (which she calls "flashes") of the lives/deaths of victims of violent crimes.  Always the victims.  And never anyone she recognized, until suddenly she does:  a young woman who died on the train tracks in suspicious circumstances.  No one believes that she actually sees things, of course, especially her concerned father.  That is, until a young idealistic police officer named Tom becomes aware of her talents and realizes how useful and important they could be for the investigation.  But as she gains a clearer picture of the truth, Charley finds herself getting closer to danger.

Based on a popular self-published series of crime stories, this novel suffers from much of the hubris (and dearth of editorial intervention) that I tend to associate with the self-published.  The author is a former police officer and he shows great comfort with writing about the profession, but his characters are stuff and lack much depth.  The cops and the killer are stereotypes, and Charley herself lacks much of interest as a YA character.  So, instead, the novel relies on its plot, which moves briskly (if somewhat improbably) towards a conclusion that some may find unsatisfactory but which is probably the best possible solution for its set-up.


[Disclosure: I received an ARC of this novel from the publisher in exchange for an unbiased review.  The book is scheduled for release on October 27th.]
Posted by Paul at 7:18 PM