I Was Here, by Gayle Forman 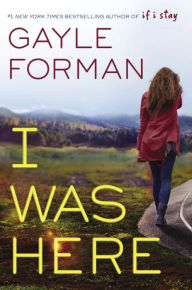 After friend Meg kills herself, Cody goes in search of an explanation.  And when she discovers that her friend's death may have been helped along by a suicide "support" group that provided both the encouragement and the knowledge for how to end her life, Meg becomes obsessed with trying to track down Meg's "killer." But along the way, Cody finds out just how unclear intentions are, and comes to question the values she holds herself.

An interesting riff on both the themes of suicide and of finding the strength to live your life.  Cody has a lot of strikes against her ranging from rural poverty to a broken family.  And she makes a fair share of poor choices along the way.  But she's got strength and perseverance and that makes her interesting.  Less so the supporting cast and the love interest (I could have given all of them a pass!).  But the story hits the good points and moves along at a crisp pace.  Nothing spectacular, but a decent read.
Posted by Paul at 8:29 PM