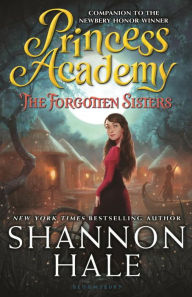 In this third (and last) installment of the Princess Academy series, Miri still has not managed to get home to Mount Eskel.  Their kingdom is under threat from an aggressive neighbor and a plot is hatched to propose marriage between the foreign king and a princess.  However, where to find a princess?  The answer is an obscure set of royal cousins in a backwater swamp called Lesser Alva, and Miri is sent there to tutor them and prepare them to become suitable material for a royal marriage.  But when Miri arrives, she finds that her charges are wild abandoned children and that things are very much not as they should be.

A wildly convulsive story that combines material from the first two books, while introducing new and interesting characters to the adventure.  We move through life in the swamp to dealing with exploitative adults to invasion and war -- the pace is unrelenting!  It also felt very rushed at the end and failed to gel as we are pushed into a series of crazy coincidences and convenient resolutions.

But let me wrap on a positive note.  From the beginning, I've enjoyed the strength of the female characters.  Even in the face of men with weapons and greater physical strength, the girls always manage to come up with plausible counter-strategies that rely on intelligence, cunning, and bravery (although admittedly more violence in this book than the predecessors).  And even in a story that accepts that girls are subjected to training in poise and demeanor that boys are spared, Hale finds empowerment instead of shame in such feminine curricula.  Yes, you can have your cake and eat it daintily too!
Posted by Paul at 5:26 PM

I did find this one the least plausible of the three stories. But I still like Miri, and I like the way the three sisters in this one developed their characters. The ending was cute! (Okay, not quite in keeping with the more serious political tone, but it felt like Hale was returning to what she wanted the books to be.)