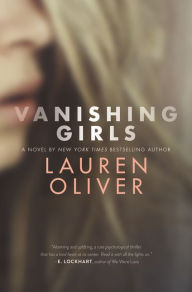 A few months ago, Dara and Nick were in a car accident.  Since then, the relationship between the two sisters just hasn't been the same.  Dara has become distant and trouble, while Nick tries to remain the good daughter and cover for her.  But it isn't just sibling rivalry, as Nick can tell that something has really happened to her sister.  And at a time when their parents are separating, Nick could really use a more supportive sibling.  Meanwhile, Nick is managing an exhausting summer job at a local amusement park and both of the girls get involved with a manhunt for a missing child.

Oliver has a good collection of best sellers under her belt now and that tends to encourage experimentation.  This novel is full of the stuff.  In addition to a complex narrative that switches back and forth between the girls' voices, the timeline also shifts between past and future, leaving the reader just slightly off-balance.  She's interspersed online news stories (complete with readers comments) and some random photographs.  The former works pretty well and speeds up some of the more tedious details in the plot, but the photographs really didn't work for me.  They are marginal to the story and mostly distract the reader.  Overall, I get why Oliver would be itchy to experiment with her storytelling, but the resulting novel becomes hard to read.  The plot twist at the end takes a while to digest and seems a bit of a stretch.
Posted by Paul at 4:19 PM