Vivian Apple at the End of the World, by Katie Coyle 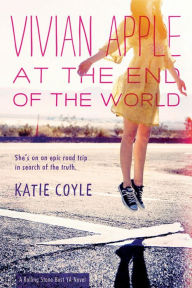 Vivian never paid any mind to her parents' conviction that Rapture was coming and that they would soon be taken to heaven, until the day she came home to find two holes in her roof and her parents gone.  Right on schedule, five thousand people have disappeared and, for the thousand more Believers who were not taken and for the people who were simply left behind, there is the question of why it happened?  With the world itself seemingly coming to an end and anarchy taking over, Vivian and her friends embark on a desperate road trip across the United States to try to find some answers.

This novel is a rough story -- entertaining, but ultimately flawed.  It works best as an apocalyptic thriller and less well as a polemical diatribe against religion and consumer culture.  Unfortunately, it's the latter that really interests Coyle.  We've seen paper tiger depictions of the evils of Evangelical Christianity before, and her particular take would be offensive if it were not so ludicrous.  Even if you aren't distracted by her silly religion-bashing, the plot has an annoying habit of relying on belated reveals of plot points essential to the story (when the story makes less sense in the re-reading, you know you're having trouble!).

But hey, there's a sequel, so people found it entertaining enough to buy it!
Posted by Paul at 9:08 PM