Everything That Makes You, by Moriah McStay 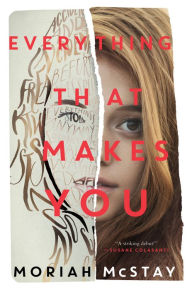 It's an interesting experience to read a book and to completely miss the entire point of the story.  I happened to tackle this one when I was a bit tired and exhausted during a thirty-hour flight to New Zealand so I have a good excuse readily at hand.  However, in quickly skimming through the book again, I realized that it actually was an easy mistake to make.

The novel, according to the blurb, is a what-if thriller about how one girl's life would be different if a crucial moment in her childhood had turned out differently.  However, you would never realize that this was the purpose of the novel if you hadn't read the blurb (which I in fact did not do until after I finished reading the book).  So, instead, what I read was a story that alternated chapters between two girls with similar names (Fi and Fiona) who seemed to move in the same social circles (they had the same friends) but for some mysterious reason never interacted with each other.  One of them starts off with a sucky life but rises above her set-backs.  The other one starts off golden and goes down in flames.  The idea that they were supposed to be the same person (in parallel universes) never even occurred to me.

Now, the fact that I completely missed the entire premise of the story would normally lead me to disqualify myself as a reviewer, but in this case I think it's my point:  When the writer can't tell the story without a summary (and the summary is not actually part of the book), the story isn't well told and cannot stand on its own.  Knowing the premise now, I love the idea of the story, but I shouldn't need a publicist's intervention in order to appreciate the book.
Posted by Paul at 3:14 PM