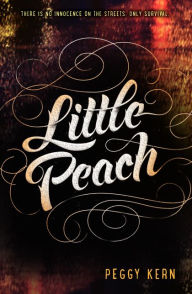 Beat up and lying in a hospital bed, fourteen year-old Michelle recalls how she ended up as a child prostitute in the streets of Brooklyn.  From her relatively happier younger days being raised by her caring grandfather (until he died and she was forced out of her home by her junkie mother) to her arrival in New York City and being groomed by a pimp.  It's a cruel and brutal world, and seen in this novel entirely through a young girl's eyes.

This short, tightly written, and utterly brutal story is as compelling as it is stomach churning.  Michelle is a rough and crude character, and her behavior can be at times mystifying, but the story is told with such sympathy and insight that I felt drawn in the entire time.  I wished for a more uplifting ending to provide some sort of catharsis, but Kern knows better than to sweeten a story where, as Michelle puts it, "there isn't a magic place for kids like us." Haunting and essential.
Posted by Paul at 3:02 PM