Alex As Well, by Alyssa Brugman 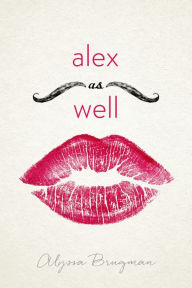 Alex struggles with sexual identity.  While she's been raised as a boy, she's never felt that way (even if she has a shrunken "noodle" to prove it).  And when she decides to go off her meds and enroll herself at a girls' school without her parents' knowledge, she takes a brave step out.  Her parents violently disapprove of her decision and they have a number of angry intercations that culminates in Alex's decision to move out.  Meanwhile, she finds it is just as hard to be a girl as it was to be a boy, although she also finds allies in her changes.

An interesting look at an intersex child.  Brugman struggles a bit with how to present the story, trying both an internal dialogue between Alex's masculine and feminine sides and interspersing her mother's exasperated online confidences about her struggles to understand her child.  The latter is painful reading as the mother is incredibly self-centered and abusive.  And it also distracts us from the more important story of Alex's own growth.  That there will be people who will hurt Alex, we can be fairly certain, but seeing so much of it really adds little to the story itself (after all, I imagine that Alex can do a pretty decent job of hurting herself without her parents' help).  A subplot about a fashion modeling career seemed similarly off-topic.  I think the novel would have been strengthened by simply focusing on Alex herself as she discovers how to interact with her peers and become the person she wants to be.
Posted by Paul at 11:14 AM