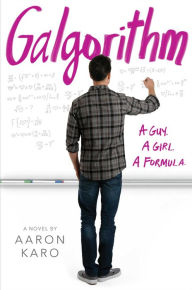 Shane has figured out how to get a girl to like you (be different, notice her, tell her, and -- if all else fails -- say something nice about her eyelashes).  And he's developed a secret "galgorithm" that proves his ideas scientifically work.  Or at least that's what he tells his classmates who seek out his advice in getting girls who are entirely out of their league to like them.  Shane is in such demand that even the teachers are looking to him for advice.  Yet, Shane himself doesn't seem to have anyone in his life, except for his best friend Jak who he's known since they were babies.  But she's just a friend, right?

Billed as a book for John Green fans, Karo has some of the funny attitude of Green, but lacks the insight and the depth of that author.  The story moves briskly, but Karo is entirely too self-conscious about the potentially offensive nature of his material and refuses to play it for full comedic effect.  And rather than run with it (and apologize later), he bends over backwards to show that Shane is really a Good Guy.  That he may be, but it makes him look like a bit of a wuss (as Shane himself notes, you should never run around and apologize all the time -- perhaps Karo should have taken his character's advice?).  There's a lot of romantic tension between Shane and Jak, but you kind of expect them to work through it at the end so you don't hold your breath a lot.  And the teachers are pretty dopey for what tries hard to be a smart comedy (hint:  awkward teachers are not funny!).  In the end, the story couldn't really ever get serious enough to talk about what makes relationships work and it refused to go over the top and make the whole thing funny.
Posted by Paul at 8:55 PM