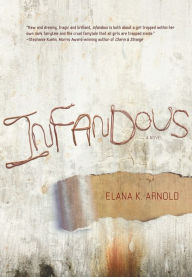 Sephora and her mother are very close. As Seph explains it, given how little else she has in her life, they'd be "broke" otherwise.  Seph spends the summer between her Junior and Senior year drifting between summer school and hanging on the beach with friends.  But things are changing:  her Mom is seeing a guy barely older than Seph and Seph herself has had a brief hook up with an older guy that she'd rather just forget.  And while all of this may seem fairly trivial stuff, there are epic undercurrents to this story that will leave you shocked.

This is the sort of novel which is guaranteed to upset sensitive parents.   Between the profanity, sex, and drug use in the first dozen pages, this is a book begging to be banned.  The intensity of the subject matter seems inappropriate for a book targeted at teens.  But as a novel about a teenager living through a micro tragedy, it's a powerful read.

Arnold intersperses Seph's story with some less-familiar tellings of myths and fairy tales (focusing on the gorier and sexually-violent elements).  The intent is not so much a feminist retelling, but simply to highlight the extremely dangerous world that these stories portray.  As Seph herself says at one point, the whole empowerment project feeling "belittling." There is a weak attempt to tie these interludes into the main story by claiming that Seph has developed an interest in myths and stories, but it felt like a stretch.  However, it made for good reading and it also opened a plausible, but entirely unexpected and brutal twist at the end.

There is also the wonderful daughter-mother dynamic between Seph and her mother.  While we don't get much opportunity to hear her mother's voice, Seph's adoration is undeniable -- a mixture of need, jealousy, and protectiveness that she waxes eloquently about.  I loved the complexity and the opportunity to hear an expression of child-parent relationship that moved beyond frustration and anger.  And the one-sided exploration of that relationship made its pathos all the more strong.
Posted by Paul at 2:43 PM