Saint Anything, by Sarah Dessen 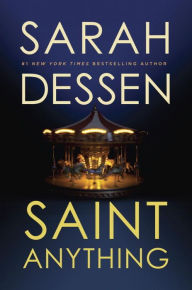 In comparison with her vibrant, risk-taking older brother, Sidney has lurked in the shadows.  When he goes too far and ends up in jail after injuring a boy, Sidney finds she still can't escape from behind his shadow.  Mom has grown obsessed with staying in contact with him and doesn't see how things are falling apart for Sidney.  To compensate, Sidney changes schools, makes new friends, and even find a new romance, but the inability of her family to confront the reality of their star son in jail continues to tear them apart.

A bit darker than Dessen's more recent novels and notably better than most of them.  Dessen is, as always, a great writer, but she has grown complacent in the last decade or so as she has found a successful formula and stuck to it.  Too often, her stories become tired rehashes of the old romantic boy-helps-girl-open-up chestnut.  To this work's credit, the romance doesn't even kick in until page 251.

In this one, she tries try to expand a bit, but it's mostly back into territory she explored in her earlier novel, Dreamland -- girl is unable to seek help from grownups and so suffers until she finally gets brave enough to ask for help.  So, we're basically waiting for that moment to arrive.  At the same time, not much else actually happens and there's a real pacing problem.  So much so that the last ten or so pages of the book is a massive epilogue in which all the loose ends get wrapped in retrospect (i.e., rather than actually showing us the resolution, we get told how it all ended).  This is pretty unsatisfactory, but after 400 pages of build-up, Dessen probably needed to close down the story.  I wish she had started that wind-down about 200 pages earlier!
Posted by Paul at 2:26 PM