Ship of Dolls, by Shirley Parenteau 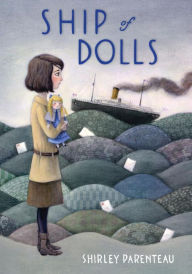 An exchange of "friendship dolls" between Japan and the United States has been announced to promote international peace and understanding, and Lexie's class in Portland has raised the money to purchase a doll to send.  She's a beautiful doll and Lexie longs to hold her, but even more exciting is the contest that has been announced.  The students are challenged to write a letter to accompany the doll and the winner will get a paid trip to San Francisco to see the send-off of the dolls.  This is especially important for Lexie because San Francisco is where her mother is living now.  Lexie hopes that by going down to see her mother, she can get her Mom to take her back so she no longer has to live in Oregon with her grandparents.

The exchange of the dolls is a historical fact that was also the setting of one of my favorite books (The Friendship Doll, by Kirby Larson) which focuses on the story of the dolls that Japan sent to the United States in return.  It's fascinating material for novelization and it's interesting how very different these two books are.  Larson's book is a rather metaphysical book that attributes all sorts of magic to the dolls, while Parenteau's book is fairly firmly set in reality.

There's a great deal of sentimentality and wholesomeness to this book that might make the jaded reader wince (this book will upset far fewer adults than the ones I've been reading recently!).  Lexie is a creature of her time (the 1920s), dutifully following expectations and living within her grandmother's strict conservative expectations.  But she is also a deceptively strong and empowered girl.  She makes quite a few poor choices, but she realizes her mistakes and is haunted by her conscience.  And even when she would love nothing better than to hurt people who have hurt her, she is able to put aside her desire for vengeance and do what must be done.  Certainly, her decision late in the story to give her most treasured possession away to someone who needs it more is heartbreaking and heartwarming.  Throughout the story, we see Lexie fearlessly stand up for herself and eventually make the right choices in the end.
Posted by Paul at 8:17 PM