Tell Me Again How A Crush Should Feel, by Sara Farizon 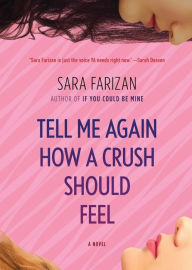 In Farizan's first novel (If You Could Be Mine), she explored a lesbian romance in Iran.  It was an exercise that was deeply colored by politics and history, in which the romance itself got fairly smothered, in my opinion by the fact it was placed in such an exotic and hostile setting.  Now she's brought it home.  This new novel features Leila, a teenage Iranian-American living in Boston, attending an elite private school, and struggling with her own identity.  The change of setting makes a world of difference, and it allows us to now focus on Leila herself.

She knows that she likes girls and is fairly convinced that this is not a temporary phase, but she struggles with coming out for fear of how her friends and family will react.  Her father, in particular, is quite conservative and she has observed how other gay Iranian-Americans were treated by the emigrant community when they announced their sexual identity.  The arrival of a very exotic foreign student at her school adds urgency to the matter and also gives Leila some additional problems.

I found the book both amusing and touching.  Leila has a great sense of humor and there are lots of fun moments through the book.  This in no way detracts from the seriousness of her concerns or the struggles she goes through, but rather keeps things light and draws us to her.  The characters, in general, are largely portrayed in a way that makes them sympathetic and familiar, whether it is neglected friends or anxious parents.  Aside from the sheer evil of the bullying Saskia (and even she can elicit some sympathy!), these are characters with whom we can relate.
Posted by Paul at 1:34 PM