We Are All Made of Molecules, by Susin Nielsen 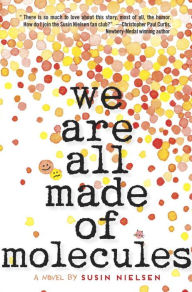 Coming together as a blended family doesn't come easily for Stewart and Ashley.  He's a brilliant, but socially awkward boy building a electric bike and missing his late mother.  She's a fashionista with limited academic skill and a latent anger against her father who has recently come out of the closet.  But while the two of them are antagonistic from the start, they can come together when they have to, in order to stand up for what is right.

A charming story of the many ways that families and friends can support each other.  I disliked the rather cruel way in the story that Ashley's needs were shortchanged and her intellect belittled while Stewart's social ineptitude is frequent glossed over.  However, in general, the novel has some good messages about the need to stand up against bullying.

There are other things that stand out in this book.  As usual, I appreciate the attempt to show both the strengths and flaws of the adults alongside the kids (it isn't just the kids who bicker -- the grownups are equally as skilled).  And, as much as this is a message book, the sermon is not heavy handed, giving us a good story as well.
Posted by Paul at 8:11 PM