When You Leave, by Monica Ropal 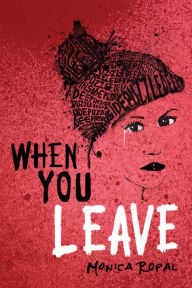 Cass has trust issues, so when the cute football player at her new school starts showing an interest in her, she has a hard time believing he's for real.  After all, she's just an angry skateboarder from the wrong part of town.  Their relationship, however, blooms into something special and she appears to be turning over a new leaf...until he is murdered.  Worse than the shock of losing him is the fact that one of her friends (Gav) is accused of being the murderer.  Cass becomes obsessed with clearing Gav's name and finding the real killer.  But can she conduct the search on her own?  Or must she somehow find the strength to trust others?

This is a surprisingly effective story and I can easily call it one of the best novels of 2015.  I was hooked from the beginning by one of the grittier and more interesting romances I had read in a long time.  So I was pretty ticked off when the guy got murdered.  But Ropal has a lot of skills in her pocket and, out of that crucial plot twist, she produces one of this year's most memorable heroines.  Cass is no shrinking violet and she has a dedication and bravery completely unknown to YA.  All of the characters are strong, in fact, and there is a refreshing bluntness to the way that they interact with each other. I particularly liked the development of Cass and her silent friend Mattie's relationship that will have many readers scratching their heads.

Ropal doesn't waste time with the misunderstandings that so many writers use to drag a story out.  This is a story that instead continually puts out and just as steadily surprises.  And it does hurt to have a female character that can fight off the bad guys without a big bad boyfriend to defend her.  These are coarse characters and the story isn't pretty, but the storytelling is compelling.
Posted by Paul at 7:51 PM