Forever for a Year, by B. T. Gottfred 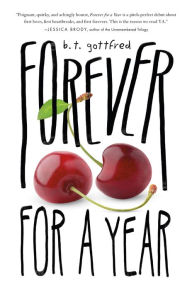 Told in train of consciousness and alternating viewpoints, Forever for a Year traces Carolina and Trevor falling in love and the various dramas of this first romance of ninth-graders.  From the initial ecstasy of finding out that their feelings are reciprocated to experimentation with alcohol and sex to the betrayals and fallings out, every emotion is tracked in painstaking (and painful) detail.

Neither character is particularly deep and Gottfred does a particularly astute job of portraying the contradictions and randomness of the characters' thoughts -- this is both a strength and a weakness.  Far too often, I've criticized YA books for creating artificially mature-sounding narrators.  But one can take this too far in the other direction and there's a limit to how much waffling and melodrama one can take.  Worse, both of them have a tendency to become repetitive, which makes the 420-odd pages of this novel excruciating at times.  The lack of depth in their thoughts also does not endear them to the reader.  Carolina in particular can be grating (although Trevor's whining got on my nerves as well).  It's an interesting experiment, but I think I'll return to my overly erudite protagonists.
Posted by Paul at 3:53 PM