I'll Meet You There, by Heather Demetrios 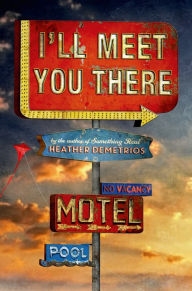 Out in the California dessert, there isn't much to keep a kid in town, unless they have no way out.  Skyler's got a full ride at an art school in San Francisco, so she's definitely getting out.  But when her Mom takes a nosedive, loses her job, and crawls inside a bottle, Skyler realizes that she's getting sucked in herself and wonders if she's about to lose her dream.

Josh has just returned from Afghanistan with a little less swagger and missing half a leg.  Before he left, he was someone that Skyler would have avoided, but he's changed and there's something that draws her to him.  It's a volatile combination:  a girl and a boy both angry at what fate has dealt to them.  But together, they just might be able to forge a relationship that could save them both.

A well-written story of damaged humans finding each other and using their love to rebuild.  I have no qualms with the writing or the character building.  These are complex people who felt very real.  The novel is, however, an incredibly dreary story and a bit of a slog to get through.  Bluntly, their lives suck and that's sort of the point.  And the little victories they attain won't lift you very much.  So, be prepared to be very depressed!  That doesn't make this a bad book, but it should make you pause before you decide to read this for fun.
Posted by Paul at 5:55 PM