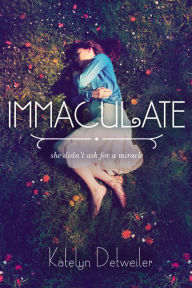 When Mina starts experiencing all of the symptoms of pregnancy, she rules out that possibility without a second thought and assumes that she's developed some sort of rare sickness.  While her perfect boyfriend Nate would certainly have liked it if they had done it, she's definitely still a virgin.  But as it turns out, she is pregnant.

Coming to terms with her new situation is challenging, but nothing compared to the humiliation and frustration of trying to explain what happened (or rather, what didn't happen) to her friends and family.  Nate and even her father reject her and she becomes a target for mockery and derision from her peers.  And then things start escalating as her story goes viral and spins out of control.  Complete strangers both attack and embrace her as either a liar or a living saint.  Through it all, Mina herself struggles with trying to atone for something she did not do and at the same time accept her new role as a mother-to-be.

The book has both strengths and weaknesses, but ultimately fails to deliver on its promise.  In particular, Detweiler struggles with the dramatic element of her story.  She never quite explains the motive of the antagonists and it is obvious that the entire thread seems uncomfortable to her.  Another weakness is much exploration of philosophical implications of the premise.  What does it mean to be the carrier of a spontaneous pregnancy?  Detweiler brings this stuff up, but doesn't explore it and doesn't appear to have much to say about faith or accepting Divine Grace.  Detweiler skirts the religious element, which seems odd given the story and the book's title.

The strong parts of the novel (and the places I really enjoyed) were in Mina's growth as an impending mother.  And while a story about maternity can easily grow saccharine, it is handled well here.  In the end, it seems that this novel might have just worked better as a simple teen pregnancy story without all the baggage and promise that the idea of a contemporary immaculate conception raises.  Don't get me wrong, I love the idea of where that more complex story can lead us, but it will take a more complex book than the author has created here.
Posted by Paul at 10:55 AM