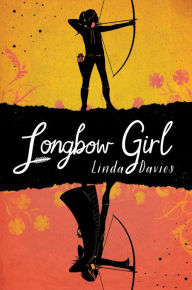 Brave and resourceful fifteen year-old Merry Owen discovers an ancient book on their property in Wales.  The book is valuable and the sale of it could save her family's ancestral home from the clutches of the bank and their greedy neighbors, the de Courcy's.  But the book is far more than a valuable artifact, as Merry and her friend James discovers, as it leads them on a time traveling adventure to the sixteenth century and the fulfillment of Merry's destiny.

Wales, longbows, and ponies!  What's not to like?  The story dragged in the beginning while stuck in modern day, but as soon as we find our way back to Renaissance Wales, I was hooked in to the adventure!  Fast paced and the total page turner, I needed to know how it would turn out.  It helps to be an archery fan, but after Hunger Games, who isn't a sucker for an adolescent girl with a bow?  Merry was intelligent, extremely resourceful and just plain kick ass.  (It didn't hurt that the author knows her archery and the descriptions were technically accurate)

I was less taken with the love interest, which fell flat.  There was supposed to be the traditional star-crossed lovers thing going on (poor girl, rich boy), but it never really clicked.  In fact, James seemed like a wimp compared to Merry! But English writers don't tend to write very convincing teen romances, so no surprise there!

Overall, I enjoyed this lively adventure, which reminded me of Michael Crichton's Timeline or a good Stargate episode.  It mixed some decent history, a compelling heroine, and an addictive story.  There's more installments in the works so if you like reading intelligent stories about female Welsh archers who kick butt, you're in luck!


[Disclosure;  I received an Advanced Reviewer's Copy of the book from the publisher in exchange for an unbiased review.  The book is slated for release on February 23, 2016]
Posted by Paul at 7:39 PM