The Cost of All Things, by Maggie Lehrman 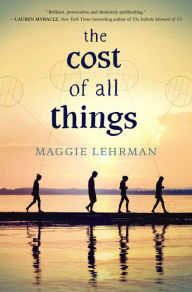 What if the hardships of adolescence could be assuaged by magic?  In this alternate reality tale, four teenagers struggle with the normal traumas of youth but hire "hekamists" to cast spells to relieve them of the consequences.  Kay gets a "hook" to keep her two best friends close to her forever.  Ari gets her memories of her dead boyfriend erased so she doesn't have to deal with the grief.  With the only immediate cost a matter of paying for the spells, solving problems with magic seems easy.

But there are always consequences.  The magic itself comes with side effects that have complicated ramifications.  As spells fly around, a solution for one person becomes a problem for others.  And then there is the unknown of the human mind and heart -- the unpredictability of life itself, which even the strongest magic cannot make safe.

A nuanced novel that works on many layers.  Obviously, the magic makes this a fantasy, but I would decline to classify this in YA Fantasy since it is really about the nature of human interaction and the inherent impossibility of protecting hearts from pain and uncertainty.  It is also about the way that well-meaning efforts to protect others will tragically hurt them far more.  In the end, it is about accepting that living and loving is risky and that there is no magic potion to help with that.
Posted by Paul at 5:07 PM