The Night We Said Yes, by Lauren Gibaldi 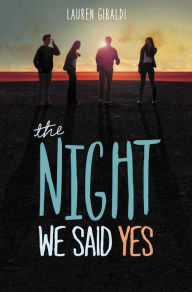 Falling in love is often a story of regrets.  This story traces that well-worn path with a novel approach.  It tells the story of two evenings in parallel.  The earlier one where Ella and Matt first met and the second one when they were reunited a year later.  We learn along the ways that, halfway through the year, Matt mysteriously disappeared.  Learning why he did so is an interesting part of the present-day track.  The novel, however, shifts us back and forth between past and present to do something far more interesting:  show how the two of them have remained the same and how they have changed as a result of their relationship and the separation.

I liked the literary device, which while slightly gimmicky, became a beautiful way of telling a story that is a lot about fond memories and nostalgia.  It was a very effective way to provide backstory to a romantic story with a lot of regret packed in.  It works best in the beginning, but wears out as the relationship matures in both timeframes.  By the point that we know what is going to happen to them (in the present, in particular), the flashbacks lose their urgency and I tired of them.  But I still think it was an effective approach.
Posted by Paul at 5:27 PM