The Summer of Chasing Mermaids, by Sarah Ockler 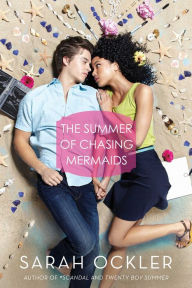 After a boating accident, Elyse flees her native island of Tobago for the cold north of coastal Oregon.  She's lost her ability to speak, which is a tragedy for a lively Caribbean girl who had a bright singing future in front of her.  In Oregon, she befriends Christian, a boy with a dream of winning a boat race (and saving his town) and his younger brother Sebastian, who dreams of mermaids -- both boys suffer in the silence imposed by their tyrannical father.  Collectively, of course, they find their voices during a summer of healing and rebirth.

Ockler has crafted a complex story that worked best for me when it was its most down-to-Earth, dealing with the boy, the race, and the conflict with the father.  But there's a lot more to the novel -- memories of Tobago, mermaid lore, mysticism tied to the ocean, as well as a lot of character back story.  Some of this was hard to follow and I found the book really hard to get into at first.

What I really did like was Elyse's strong character.  While she wasn't always good at expressing herself (especially with the men in her life), she was great at standing up for herself and what she wanted.  The romance that develops between her and Christian was particularly hot, in no small part thanks to that agency she exhibits.
Posted by Paul at 3:01 PM