What You Left Behind, by Jessica Verdi 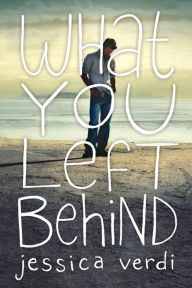 After his girlfriend dies of cancer, Ryden can't stop blaming himself for her death.  After all, he got her pregnant and it was the pregnancy that killed her (she had been receiving treatment for cancer and had to stop chemo during the pregnancy).  Now he a single Dad and sucking at the job. And his old dreams of getting an athletic scholarship seem to be slipping away.  But somehow, he's going to figure this whole thing out (fatherhood, the scholarship, and school), keep his old friends, and make a few new ones.  And then he starts discovering his late girlfriend's journals and finds out the horrible truth about why she really died.

I liked the premise and I (mostly) liked Ryden -- he's got a lot of facets and he's generally quite sympathetic. But the whole blaming himself thing fell flat, as did the really harsh criticism he takes from his friends.  The story was melodramatic enough without all the whining from Ryden.  There were also a number of throwaway subplots (the girlfriends' parents, Ryden's ex-girlfriend Shoshanna) that did nothing at all.  In sum, the novel needed a red pen and a focus.  It also needed to be shortened and given a lot more punch -- the secret truth that is supposed to devastate our hero is painfully obvious to the reader long in advance.
Posted by Paul at 8:18 PM