All the Rage, by Courtney Summers 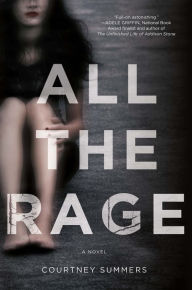 Everyone in town knows the Turners.  Power neatly resides with whoever is allied with them.  So, when Romy and her family falls out with the Turners, it's pretty much open season.  The older Turner boy rapes Romy, but rather than elicit sympathy, Romy is accused of fabricating the story and she is subjected to another sexual assault a few weeks later.  The second attack is not so easily written off by the town, because another girl has disappeared at the same time.

None of which matters to Romy.  She has no will to fight the town and she seeks refuge in a job out of town and a boy she meets there.  All she wants is to keep that world separate from the one back home.  But doing so is getting more and more difficult.


A gruesome and unpleasant story that combines a suffering and sympathetic protagonist against some heavy baddies.  It also has a lot of ambitions, building a story on the important subject of rape culture, but it stretches credulity along the way and relies on thinly drawn villains and poorly explained motives.

The blurb for the book claims that the author is trying to show how silence is "inflicted upon young women" but it is not that simple (even in this story where Summers has stacked the deck against Romy).  I have no problems believing that a rape victim would be reluctant to go public and that she would not want to deal with a law enforcement force that is this blatantly corrupt.  But when she is unwilling to talk to anyone at all (including a mother with whom she apparently has a good relationship), one has to acknowledge that some of this silence is self-imposed.  And rather than explore that idea, the story leaves a huge void that leaves us wondering why Romy doesn't speak (and not why others try to silence her).

Furthermore, it all seems terribly exploitative.  Rather than give Romy a chance to gain a voice or to heal, we're just shown again and again how helpless and ineffectual she is.  There is enough injustice in the world and sexual violence is cruel enough in itself to provide ample drama for a decent story.  Inventing a character who does everything she can to hurt herself just seems cruel and mean.  To me, it seemed like Summers just wanted to amp the trauma and drag out the story.  What I learned is that when you're hurting and need help, you should spurn every offer you receive (that is, if you want to make the story "shocking").
Posted by Paul at 7:58 PM