Cut Both Ways, by Carrie Mesrobian 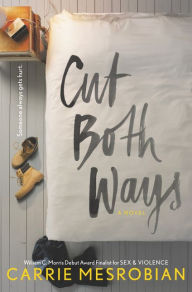 Will is a pretty confused guy.  He's got a girlfriend Brandy and a guy best friend named Angus, with whom he likes to trade hand jobs and blow jobs.  He doesn't know how to classify himself and he's not really serious about either of his partners anyway -- he just likes the sex.  In several ways, this lack of concern reflects his overall life.  He loves his Dad (who's an alcoholic) and Will is happy to ignore his problems in order to spend time with him, working on a house remodel.  It's certainly better than hanging at his Mom's place with her new husband and his half sisters (whom he actually enjoys).  He dutifully does his homework, but he's long since stopped caring about school and finds more enjoyment at his diner job doing cooking prep.  And he is simply drifting through life.

Mesrobian wants to make a big deal about Will's inability to identify himself as "bisexual" but I found no such depth in the character.  Will would basically describe people like himself as "fucking douchebags" (it's fair to say that the book has an excessive amount of profanity in it!).  He doesn't commit to anything, but simply drafts from one hedonistic pleasure to another.  And -- spoiler! -- he never really changes in the end either.  He mopes a bit about how "unfair" it is for him to two-time Brandy and Angus, but it doesn't stop him from thinking with his penis (and boring us with sharing how often he gets an erection).  I found him a pretty despicable person.  The constant profanity didn't help either.  It's an interesting character study, but who cares about the result?

Which brings us to the overall problem of the story.  The blurb for the book hints that Will will have to choose and that, no matter how he chooses, he will get hurt.  The problem with this is that it's false advertising:  Will never chooses anything!  He, in fact, makes a habit of avoiding any decisions whatsoever (either by not acting or by avoiding people who would make him choose).  He gets in a bit of trouble for this avoidance, but he never actually changes his behavior.  For those who care about him, this would be a source of grief.  For me, I feel no compunction with letting his pathetic story go.
Posted by Paul at 4:52 PM